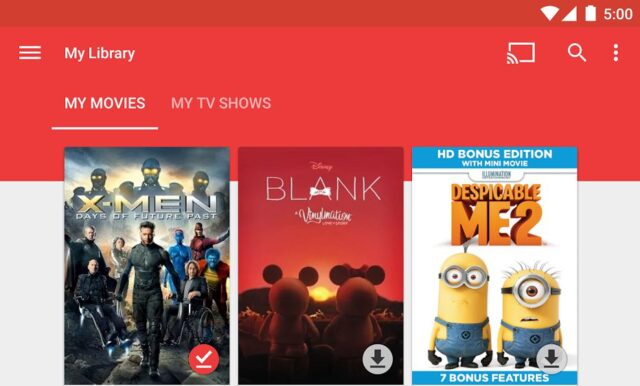 The search engine giant officially announced in a blog post that 4K content is now live on Google Play. Currently, there are more than 125 movies in 4K resolution. The company said that all 4K movies on Google Play use VP9 code so users can enjoy movies in the ‘highest quality’.

Users in the US and Canada can buy 4K movies on Google Play via their Android device or Play Movies on the Internet. However, you can watch them on a handful of devices which include the Chromecast 4K Ultra, XiaomiMi Box 3 and Sony Bravia TVs with Android OS. In addition, Google is also offering a free 4K movie on purchase of the Chromecast Ultra 4K for a limited time period. Users who buy the latest Chromecast Ultra can choose from select titles, which also include Ghost Busters and Captain Philips.

Besides making 4K content official on Google Play, the company also announced that its Google Play Movies & TV app is now available on Samsung’s 2016 range of SmartTVs. However, users won’t get access to 4K content on Samsung SmartTVs as of now.

Finally, Google also announced that it has pushed some changes to the DayDream VR platform. Users from now on can watch all movies and TV shows in a VR format, even when they’re offline.

Furthermore, they can build their library by taking a virtual tour of new movie releases, next day TV shows, along with more than 10,000 catalog titles. Users can even buy them on their smartphone so they can watch later using the Google DayDream VR headset.

With Google Play Movies now available in more than 117 countries, other regions are also expected to get 4K content soon.