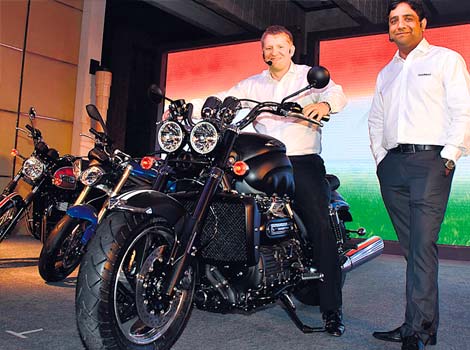 After much delay, Triumph ended speculations as it entered the Indian market. British motorcycle brand Triumph during the 2012 edition of the Auto Expo had announced its entry into the Indian market with seven models but for some unknown reasons did not go ahead with its launch plans.

Triumph is the largest British motorcycle manufacturer tha has more than 740 dealers across the world and claims to employ around 2,000 people globally. It plans to start delivering bikes 2014 onwards and is targeting to sell around 500 units in the first six months of the launch in the country.

We wanted to make sure that we entered the market with right models and right partners. So it took us time to look into these issues. We were also looking at developing back-end support, as well as invested on the plant during the period,” he added.

The company will assemble four models in its newly established plant in Manesar, while the rest would be come as completely-built units from its plants in the UK and Thailand.

In Manesar. The rest — Rocket III Roadster, Tiger Explorer, Tiger 800 XC and Thunderbird Storm will be imported into the country as completely built units from the UK.

While the Bonneville is the lowest priced at Rs 5.7 lakh, the costliest bike from the Triumph stable in India will be the Rocket III Roadster tagged at Rs 20 lakh.  The Indian super premium bike market has seen entrants like Harley Davidson, BMW Motorrad and Ducati. Triumph plans to open four dealerships shortly in Delhi, Mumbai, Bangalore and Hyderabad.