BlackBerry Z3 to be launched in India with updated BBM

In its latest attempt to revive sales and build the ailing company from grounds up, Canadian smartphone maker BlackBerry will launch a new budget handset dubbed BlackBerry Z3 this week in India. It has been observed from the reliable sources that the step intends to fight against bigwigs like Samsung and Apple to which it is fast losing ground.

The phone will be first new BlackBerry phone to be launched after the chief executive John Chen took the charge of the sales-hit company in November. The launch also marks the partnership with FIH Mobile Ltd. a unit of the giant Taiwanese Foxconn Technology Group well known for assembling Apple products.

Indonesia and India appear much as the last volume market of the BlackBerry. Therefore, the sales in the country could well decide the success of the handset retailing for less than Rs 11,000. Also, if the plan works out, Waterloo, Ontario-based BlackBerry could produce a dent in the market share currently dominated by Apple’s iPhone and Samsung’s line of Galaxy devices powered by Google’s Android operating system. 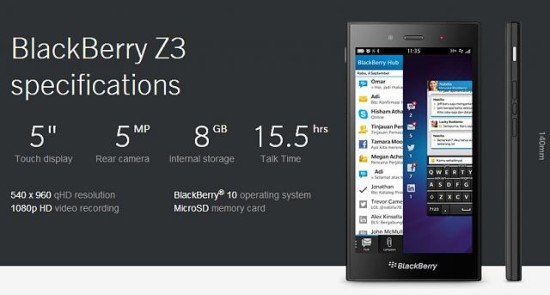 The Canadian firm had a 40% share of the Indonesian market 2 years ago, labeling the island nation as “BlackBerry Nation”. Later it was captured by Korean giant Samsung after the launch of the premium, high-priced BlackBerry 10 failed to attract buyers.