Asus Zenfone AR is a flagship, and all the design and aesthetics of this smartphone reflects all that. The smartphone is slim, and the edges are square-ish with minimal curves, and the metal is chamfered along the edges. The front panel is as standard as any other flagship smartphone from a brand, but the back panel is where things get really interesting.

The back of the smartphone is made of some kind of leather with really satisfying texture on it. The Asus logo and Tango logo is engraved at the bottom part of the back leather panel. The Tri-cam system is placed in a separate module which includes the primary 23MP camera with a motion-sensing camera and a depth-sensing camera.

The sides of the smartphone have nothing special about them; the power button and volume rocker are on the right side, SIM card tray slot on the left and 3.5 mm audio port, loudspeaker and USB Type-C port are placed on the bottom edge. The fingerprint sensor is front mounted under the clickable home button.

Overall the build quality of the smartphone is fantastic, it looks gorgeous, feels really comfortable and even with the big display, it fits in the hands perfectly. Asus did work on the design aspect of this smartphone, and it feels really great that some brand thought of something new and not just following the trend of making smartphone from glass or metal.

The display of this smartphone is a 5.7 inches AMOLED panel with 2K Quad HD (2560×1440) resolution and high pixel density. The screen is protected by the Corning Gorilla Glass 4 layer and has the oleophobic coating on it for smudges and fingerprint resistance. The display is crisp, and there is no color deviation when tilting the smartphone and watching the content from different angles.

The automatic brightness control works great and shows no delay when exposed to daylight. There are a few settings for the display like Super Color, Normal and customized where you can customize the color settings your way. The sunlight readability is fantastic, as it is an AMOLED display, the content, and text on screen always readable.

The primary camera for pictures in the Zenfone AR is the 23MP IMX 318 sensor from Sony with PixelMaster 3.0 technology. The images from this camera are well lit and beautiful, the details are amazing, and no grains could be seen anywhere. You can see every single aspect in the picture, at every part and the colors are bright and didn’t look washed, in any light condition.

The camera app is amazingly smooth with no loose end, there are tons of modes in the camera app, but the one I like the most is the Super Resolution mode which captures images in super large resolution without losing details. The front facing camera also captures excellent selfies with fantastic detail and beautiful color contrast.

One of the main attraction of this smartphone is the Project Tango, Google’s Augmented Reality project. This is the first smartphone to feature this technology and to make it possible, Asus created a Tri-cam set up which includes the 21MP primary camera, a depth-sensing camera, and a motion sensor. All these sensors work together to sense the environment and use the Augmented Reality apps.

Project Tango app is preinstalled on the smartphone with a bunch of content to use it for. There are some fun apps for AR Pets and Hot Wheels game. There are some useful apps too, for measuring things and shopping apps to try the furniture in real time. Some of the apps come preinstalled on the smartphone; more apps can be installed from the play store. Lot’s of apps in the Google Play Store are not yet available in India, but we might see them soon.

After using the Project Tango for quite a while, I really like the Asus approach to bring this technology to India. But this technology needs to be polished a bit more to make it quite useful for those who want to rely on this technology. Overall Tango the experience is excellent, Zenfone AR did a great job, and all the supported apps ran swiftly.

Now, this is the part I am really excited about; Virtual Reality, leaving your real world behind and get into a new world where you can do anything. There is a whole new category for VR apps on Google Play Store, out of which only some apps support the Google Daydream VR. I came through lots of apps and games to play in the Daydream VR using the remote. 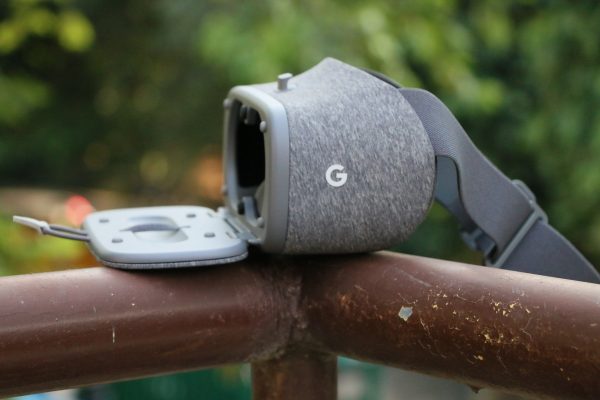 Everything on VR ran smoothly without any lag or frame drops, and the battery backup is impressive according to the VR usage. It went more than two hours continuously and still there is some juice left for the day. The phone is a little heavy which makes the VR experience a bit uncomfortable and phone heats a lot while using the VR but that’s not an issue.

Asus Zenfone AR packs so much into it, but the only part that bothers me is that Asus should have used a better processor in this smartphone. Zenfone AR features a Qualcomm Snapdragon 821 SoC with Adreno 540 and 8GB RAM. This smartphone packs two high processing power consuming technologies, and by looking at the price (Rs. 49,999), Asus undoubtedly can pack a powerful Snapdragon 835 into this smartphone.

The overall performance all around the interface is smooth and with no lag or freeze occurred at any part. The games ran at high frame rates with on frame drop or crash experienced anywhere. The real performance test of this smartphone was on the AR and VR level which this smartphone cleared easily with some frame drops seen while using AI, probably because the Project Tango is not polished yet!

The battery performance on this smartphone is the best I ever found on any Asus smartphone. After some really great rivals, this is the only smartphone which charges amazingly fast and gives longer battery life with a single charge. Without using the AR or VR capability, this smartphone can easily sweep two days with a fully charged battery.

Overall, the Asus Zenfone AR is a comeback for Asus smartphones and worths every single penny you are going to spend on it. To use the DayDream capability, you have to buy the DayDream VR headset separately. The build quality is something which most of the brands were not thinking about it lately, but it feels good that Asus did something great.

He is a tech worm who always keeps an eye on the latest tech news. He is a master at Android and Windows “how to” articles. He knows every single bit of Android OS. You will always find him playing PC games, reading tech news, flashing custom ROMs to Android phones and blogging most of the time. At PC-Tablet, he is responsible to update the readers with latest tips, tricks, & hacks to take the most out of their gadgets.
Website: https://pc-tablet.com
Posts created: 515