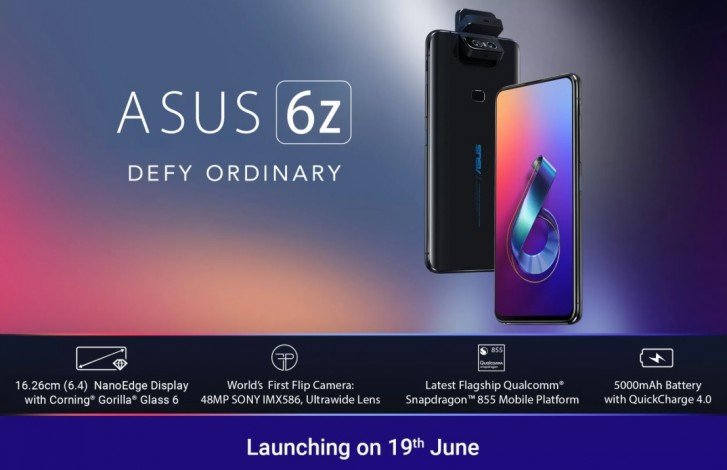 The Taiwanese giant has been teasing the Asus Zenfone 6 India launch for a while now. However, as per the media invites sent by the company for the June 19 event, the Zenfone 6 will now be launched as Asus 6Z in the country.

Notably, the change in name has been done in compliance with Delhi High Court’s decision. For starters, the court has restrained Asus from selling and advertising mobile phones and accessories under the Zen, ZenFone or any other identical trademark over trademark infringement issues.

As a result, the company had to remove “Zen” from everything, including the device’s name, the UI, as well as marketing materials. Thankfully, there hasn’t been any change in the launch date of the phone.

Following the same, the ZenFone 6 has been listed on e-commerce giant Flipkart as “Asus 6z.” And as mentioned, the landing page reveals the launch date to be June 19, accompanied by specifications and features of the device.

Under the hood, the Asus 6Z gets powered by Qualcomm Snapdragon 855 processor along with Adreno 640 GPU. Furthermore, the phone gets up to 8GB of RAM and 256GB of internal storage.

As for the optics, the device gets a motorized camera that flips to act as a selfie camera. The module comprises a 48-megapixel primary shooter with f/1.79 aperture. It is accompanied by a 125-degree wide 13-megapixel ultra-wide-angle camera.

The phone gets a massive 5,000mAh battery with the support for QuickCharge 4.0 fast charging technology. On the software front, it runs Asus’s custom UI with close to stock Android experience. Lastly, the connectivity options on the device include Wi-Fi 802.11 a/b/g/n/ac, GPS, Bluetooth v5.00, NFC, USB Type-C, 3G, and dual 4G (with support for Band 40).

The smartphone comes in Midnight Black and Twilight Silver colour options. In India, we expect the phone to be launched somewhere around Rs. 30,000-Rs. 40,000. Stay tuned for more information.