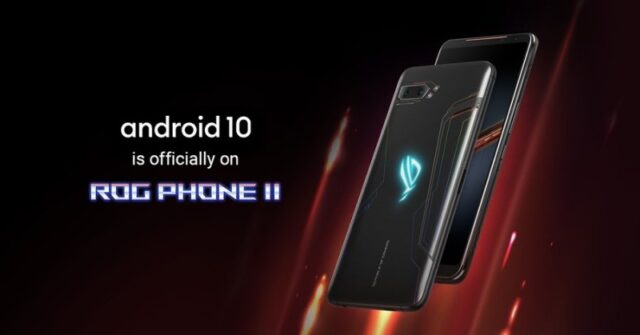 The Taiwanese smartphone maker Asus has now finally started to roll out the latest Android 10 update for its flagship gaming smartphone- the ROG Phone 2. For starters, the device already received Android 10 beta around four months back, in December 2019. And now, the company has announced the rollout of the stable release of the software.

You can either check your system settings for update notification or download & sideload it manually from the given link. Do note that the update will remove “Gestures on Dark screen,” Go2Pay and tags ability in Gallery. Also, you may experience a dark screen for about 30 seconds before the startup animation once you reboot for installing the update.

While an official changelog is yet to be available, the new update is likely to bring in tons of tweaks, bug fixes and performance improvements. It’ll also get the perks of Android 10, including a system-wide dark mode, better privacy control, full-screen navigation gestures, and more.

Note that the beta build running ZenUI 6 didn’t offer any major visual changes over the previous version. And hence, the stable release too is expected to stay the same. Though, you can expect it to fix majorly of the bugs in the beta version. Anyway, the ZenUI offers a stock-like experience for the most part and doesn’t come with any bloatware.

Starting from today, #ROGPhoneII users will begin to see the Android 10 update hit their devices.#GameChanger pic.twitter.com/15MA2Y2XaV

The update sized about 2GB is being rolled out through OTA in batches. Therefore, it may take a significant amount of time to arrive on your device. As soon as a new update is available, you’ll automatically get a notification on your device. Alternatively, you can manually check for updates in Settings > System > Advanced > System updates.

As per the current response on XDA forum and Reddit threads, users haven’t received the update yet. And Asus’s Bios & Firmware page for the ROG Phone 2 still shows the build dated December, i.e., the company is yet to make the file available for sideloading on its site. We’ll update you once it goes live along with the changelog. Stay tuned.