Asus is the market leader in India for high-quality laptops. Their product line has been actively expanded, and they consistently update the models with the newest CPUs. With their Vivobook and Zenbook lineups, they control all the significant pricing brackets. The company has recently shifted its focus to content creators and introduced its ProArt series in India. The newest product in this series happens to be the Asus ProArt Studiobook 16 OLED W7600 laptop.

The ProArt Studiobook 16 OLED W7600 comes in a relatively thin and light form factor, with the latest generation of Intel Core i9 CPU, Nvidia’s RTX A3000 GPU, a large 90Whr battery, and a whole lot more. We have been using this Pro machine as our daily driver for the past two weeks and here’s our full review

In the professional laptop market, Asus is well-recognized for its Zenbook range, which includes both heavier and more lightweight options. On the spectrum between those two is the ProArt Studiobook 16 OLED. Despite having top-notch hardware, the laptop is still only 0.84 inches thick and 2.40 kg in weight. To ensure that the target consumer gets the most out of the product, the brand has put all of its R&D resources into controlling weight and other factors. Asus has gone ahead with its magnesium alloy build with its matte finish works in favor of the ProArt Studiobook 16 OLED.

A laptop costing INR 3,30,000 should feel well-made and exude quality, and the ProArt Studiobook 16 OLED does just that. The display lid is made out of the same material, making it both strong and light. As for the colors, the laptop is being sold in a single ‘Mineral Black’ shade.

The display unit did not wobble during our two weeks of use, which is typically a problem with these ultraportable laptops. The brand did a great job distributing the weight, and the lid can be propped up with one hand. The chassis was constructed by Asus so that there is ample lift underneath for greater airflow, which helps to control the temperature at all times.

In terms of connections, Asus has taken a modern approach which can be attributed to its ultraportable use. We get a full-size HDMI 1.4 slot on the left side, which is joined by two USB Type C 3.2 spec Thunderbolt 4 ports that support both Power Delivery and Display Out, a USB 3.2 Type A slot, and the power-in connector. While on the right side, we get a Type A 3.2 spec slot, along with an SD Express card slot, an Ethernet jack, and a 3.5mm combo jack. 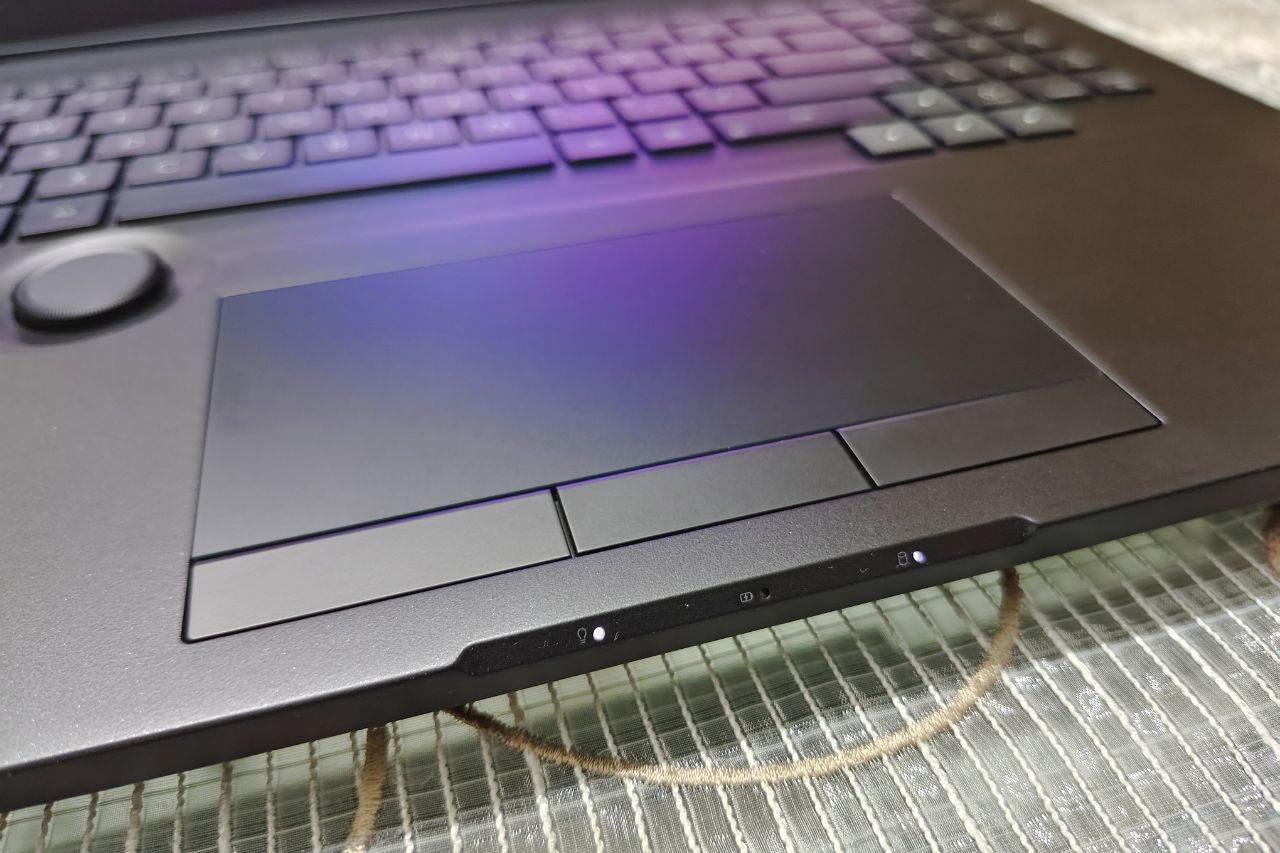 Asus has more or less covered all the necessary slots that a content creator would require in their workflow, however instead of the SD Express card slot, we would have like a UFS2.0 spec standard SD card slot.

Although you can always choose the Enterprise edition, the Asus ProArt Studiobook 16 OLED ships with Windows 11 Home. Bringing a DOS or Linux version for this wouldn’t make sense because this machine is solely intended for content creators.

Nowadays, every OEM bundles some software, just like smartphones. We discovered a few that were helpful, such as “Asus Battery Health Charging,” which handles power and battery management, “Smart Audio,” which enables you to customize the audio input settings, and “Splendid,” which handles display profiles and Wi-Fi roaming optimization. The ProArt Creator Hub mode offers several more features, including the ability to add key shortcuts, pull up the TDP of the CPU, and GPU, and customize the ProArt Dial’s controls. 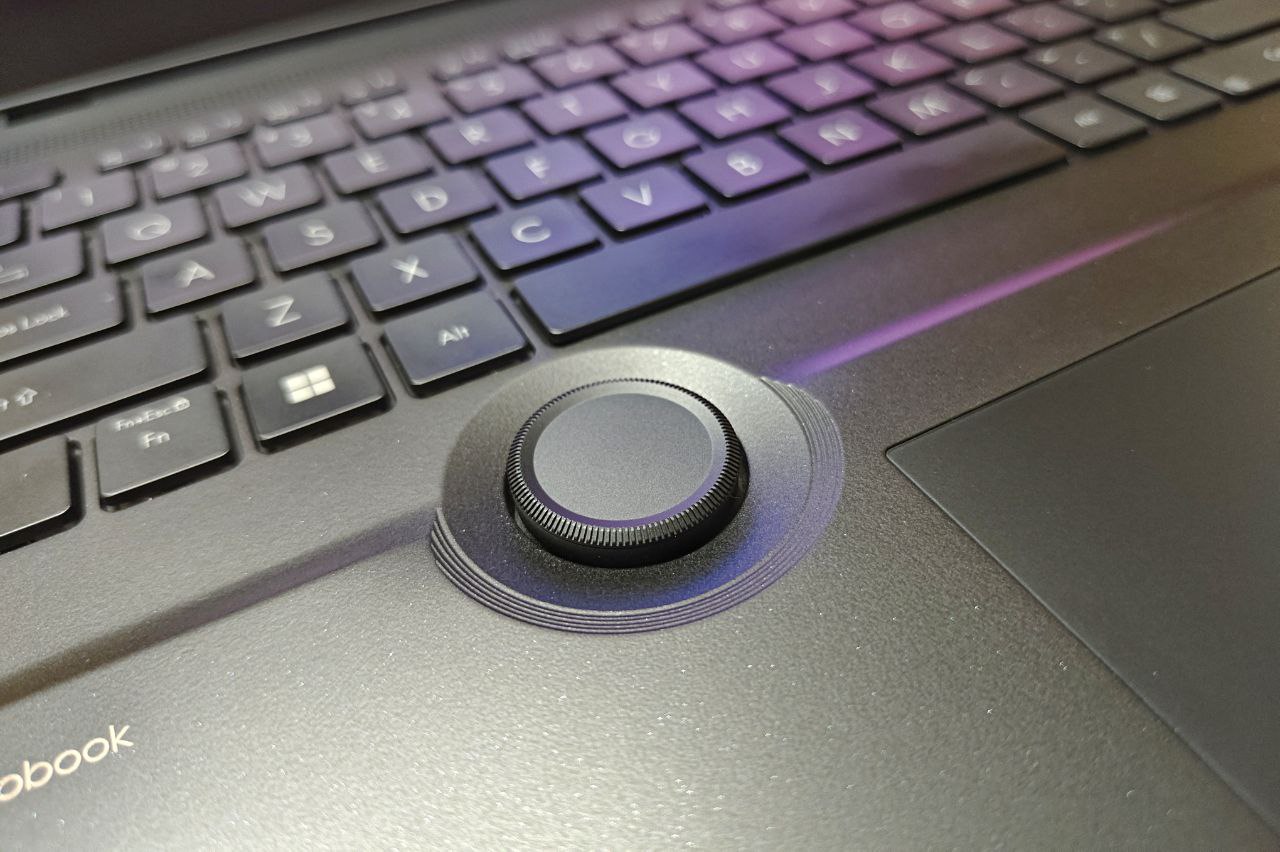 The fact that Asus is bundling the entire Microsoft Office Suite for a year and offering users a free membership to Adobe Creative Suite as part of the launch promotion should also be commended.

The Asus ProArt Studiobook 16’s keyboard features a nice pressure point. Despite the rougher surface, the keys are a standard size and feel extremely comfortable when typing. The keystroke clatter is relatively undetectable and is not thought to be a bother. There are three different brightness settings for the keyboard. The ProArt Dial, which is extremely accurate and quiet, protrudes from the bottom of the keyboard as well. It supports clicks and has that extremely delightful micro motion. In applications like Photoshop, the dial is useful for quickly changing the layer, navigating the color palette, adjusting the level of zoom, etc. 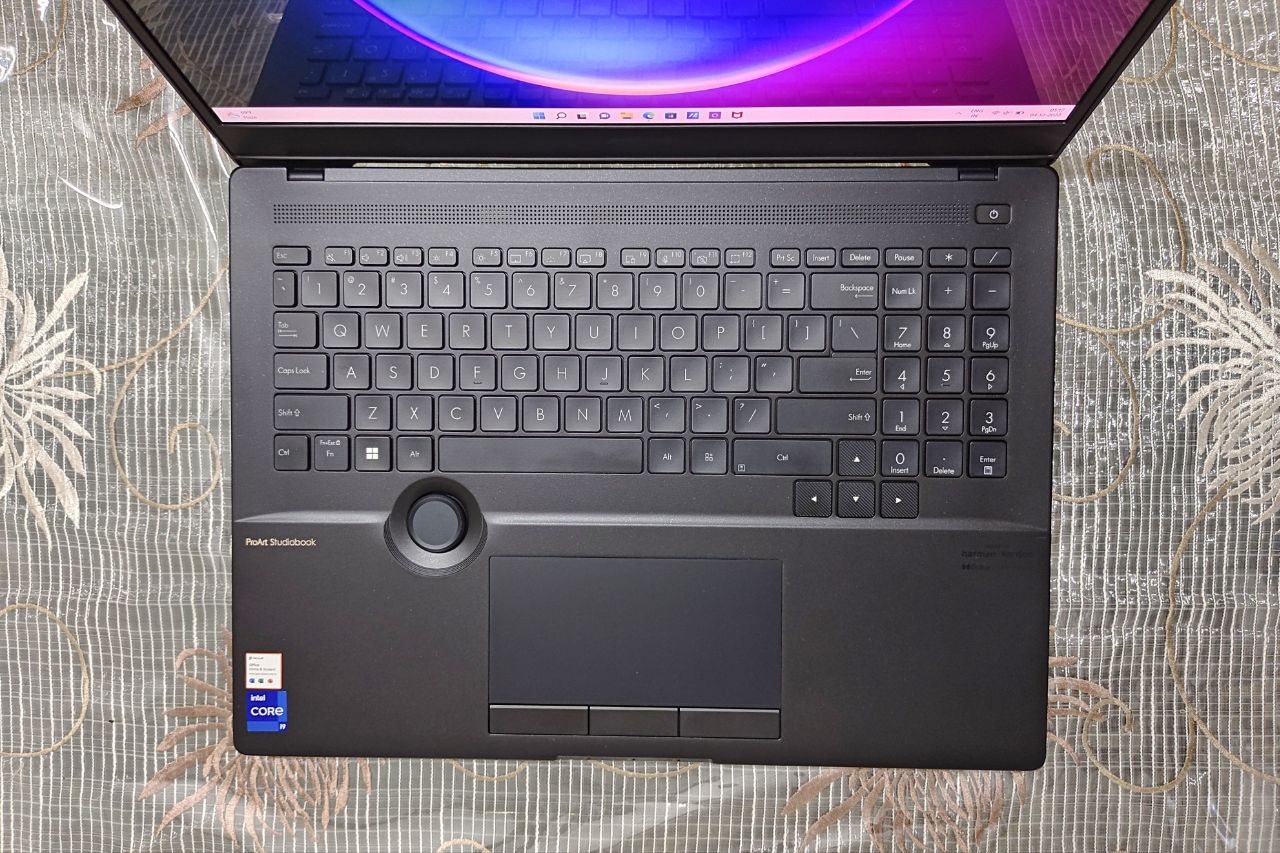 The touchpad is adequate in size and allows for pen input. Additionally, it includes Windows Precision drivers and supports multi-touch. It includes a three-button configuration with the traditional left and right clicks in addition to an additional button in the center that is used by 3D designers who want centered control for application activities like panning, turning, or circling. It is the ideal solution for creative professionals when this is combined with the Dial.

This is the Asus ProArt Studiobook 16 OLED’s standout feature. While in the past, Asus has only added an OLED panel to a small number of its laptops. This is the first laptop produced by the company to feature a 4K OLED panel with a 16:10 aspect ratio. You receive a sizable 16-inch, 3840 x 2400-pixel (4K) OLED panel with a 60Hz refresh rate. It is not yet clear from which manufacturer Asus is sourcing these panels but they are top-notch. The top bezel has some thickness from the addition of the IR camera for the Windows Hello suite while the side bezels are kept to a minimum. 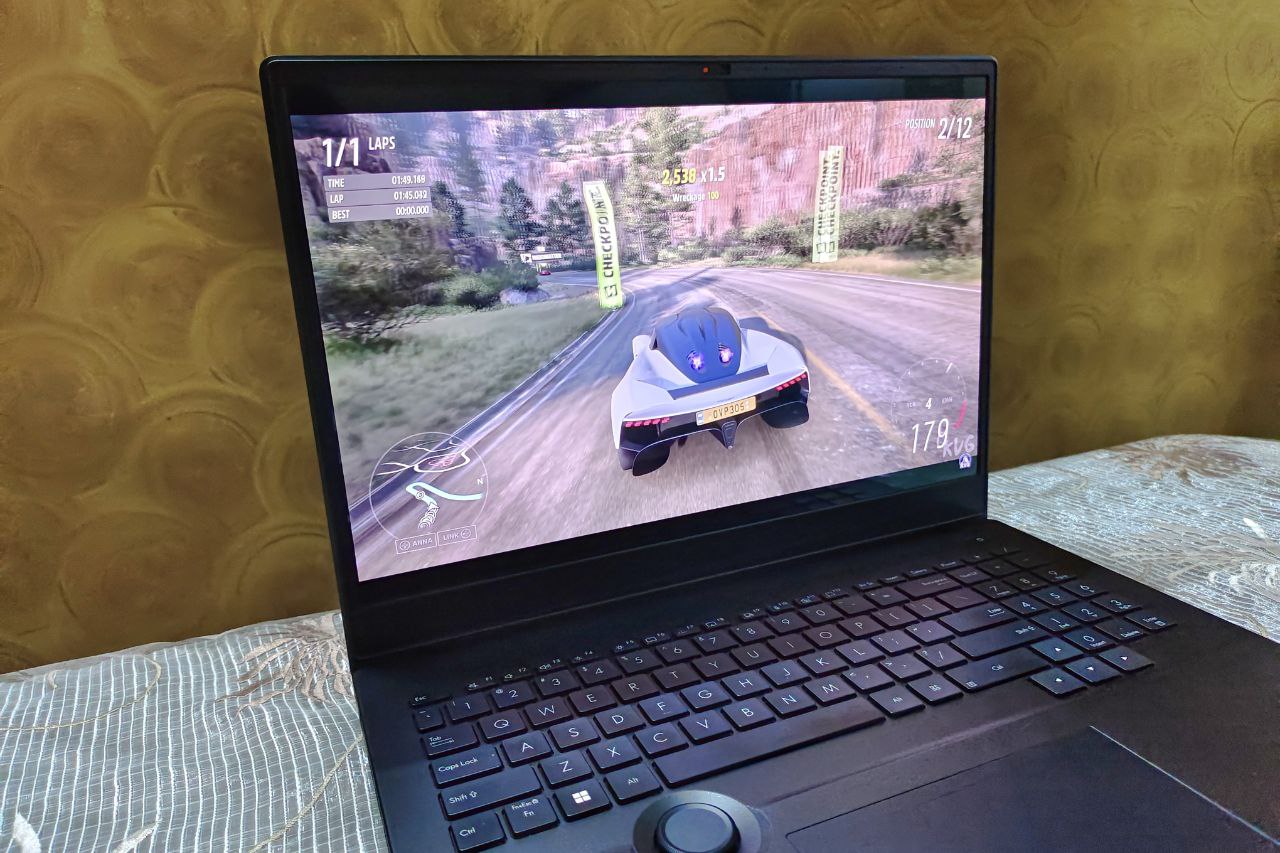 Asus’s Splendid Display technology makes a return here, allowing you to adjust colors and other important display settings. Although the colors can be adjusted even further thanks to this, we don’t believe most users would need to do so given the Pantone certification.

Asus doesn’t cut any corners and only uses the most advanced and potent components that Intel and Nvidia are currently able to provide for workstations. As a result, the Asus ProArt Studiobook 16 OLED has a 12th Generation Intel Core i9-12900H processor, 32GB of DDR5 SO-DIMM RAM, and two 1TB NVMe SSDs organized in a Raid 0 configuration. On the other hand, the RTX A3000 from Nvidia and the UHD Visuals from Intel, based on the XE architecture, are in charge of the graphics. This device has the best RAM and storage available on the market.

Paying close attention to the CPU, we can see that it has an octa-core design and generally operates coolly. Based on the Intel 7 nm technology, the chip was released to the market in the first quarter of 2022. The chip’s TDP is 45 watts, but in turbo mode, it can operate at 115 watts. The CPU cores handle a wide range of memory types and have a frequency range of 2.4 to 5 GHz. 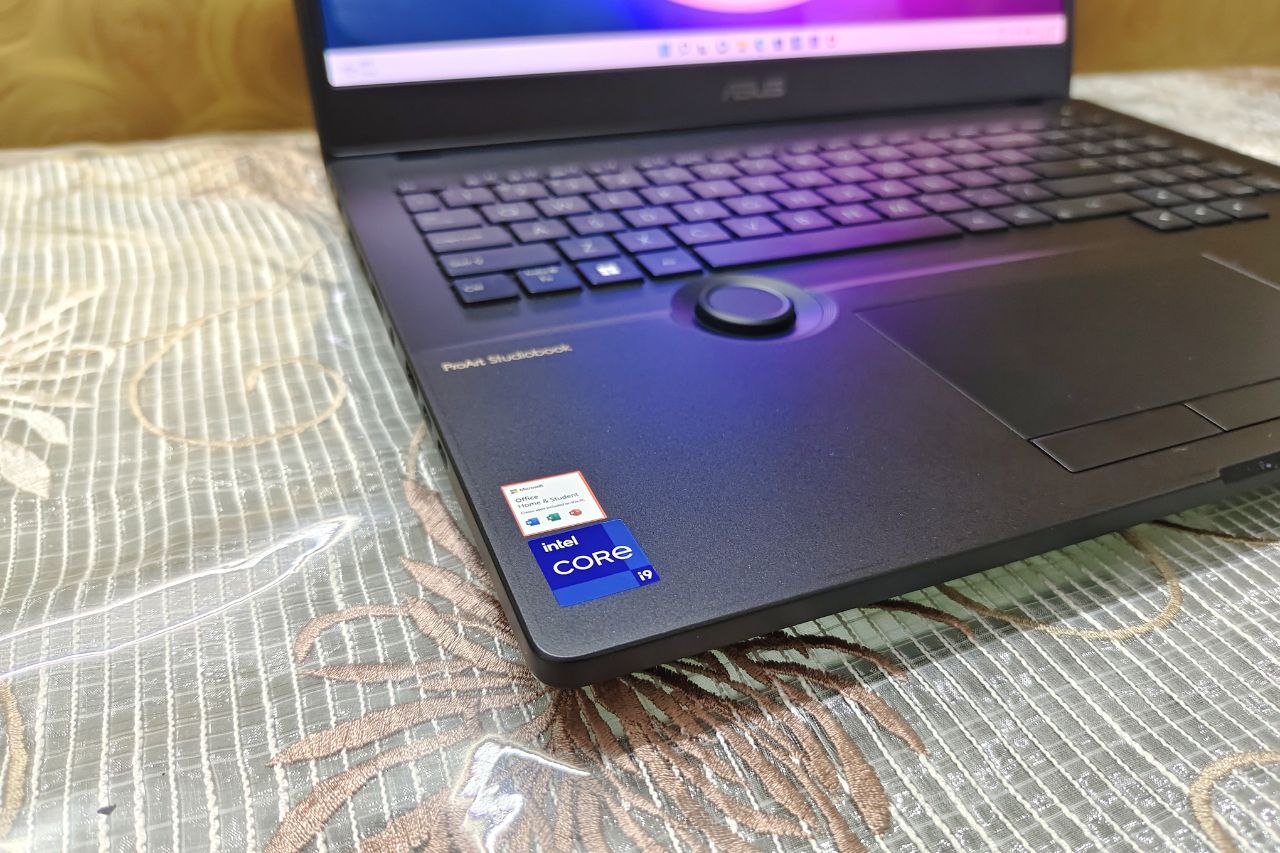 In our tests, the CPU did fairly well and handled the majority of the cases. In the performance mode, which is available in the Asus ProArt Creator Hub and automatically adjusts the cooling to the necessary duties, we tested the machine to its fullest potential. There is a normal mode for things you perform every day, and the app also lets you turn the fans all the way up. However, you can only carry out intensive tasks while the laptop is connected to the charger because the TDP drops to 15W when on battery.

The GPU on the laptop is not bad either. Asus went ahead and added the Nvidia RTX A3000 card here with its 12GB DDR6 VRAM. The machine features a strong cooling system, which helps the card, which has a TDP of up to 105 watts, run primarily cool. The RTX A3000’s performance stats are very similar to those of the RTX 3060, which isn’t bad given this isn’t a gaming laptop. Otherwise, the GPU is more than sufficient to handle labor-intensive tasks in applications like Photoshop, Blender, and DaVinci Resolve.

In terms of storage, Asus did not skimp and installed PCIe 4.0 drives that are insanely fast, with Read and Write rates exceeding 1Gb/s. The machine can take upto 64GB of memory while the storage can go up to 4TB if opting for PCIe 4.0 drives. 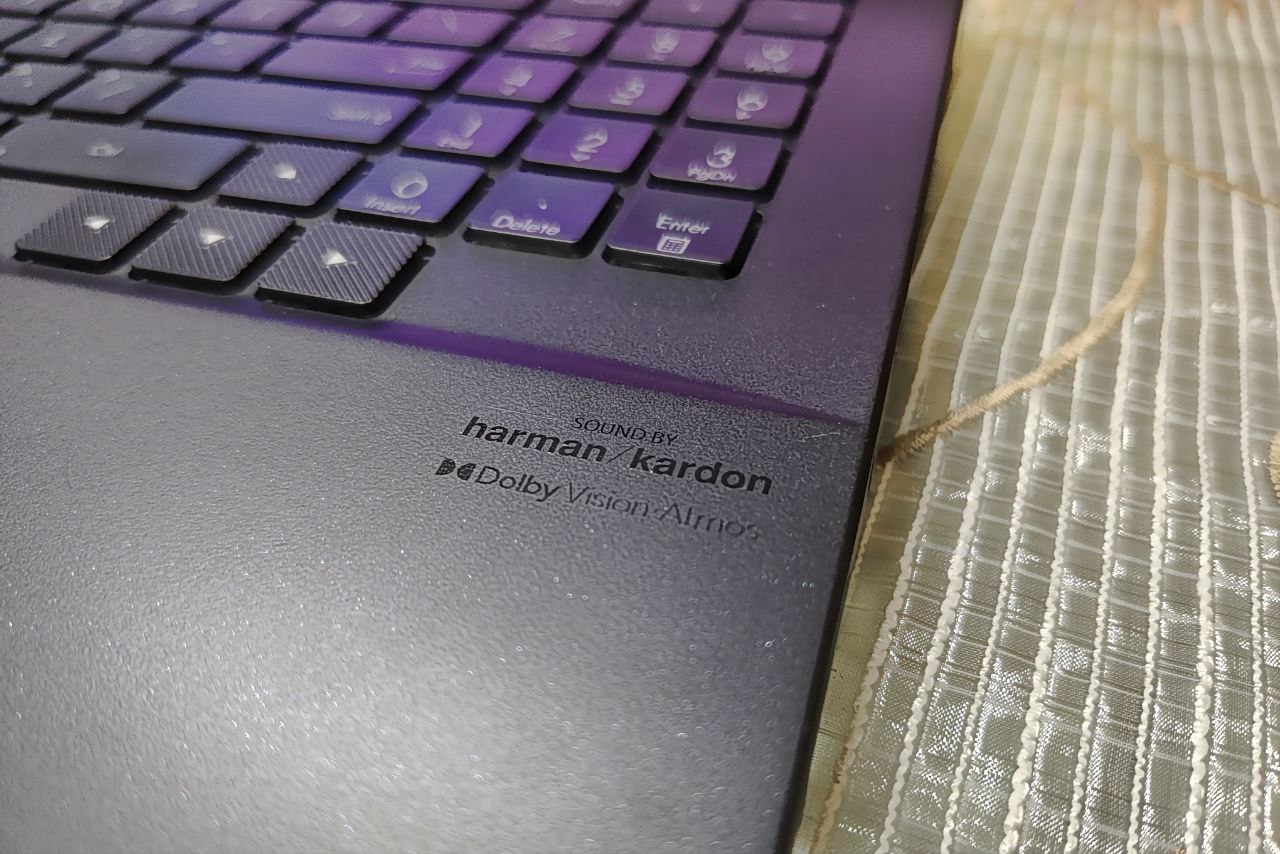 There are two Harman/Kardon quality speakers that are sufficiently loud and powerful to enjoy light content. They also feature Dolby Audio to enhance the experience. However, they are unquestionably inferior to those on the MacBook Pro or even the Dell XPS range.

The 90Whr 4-cell battery in the Asus ProArt Studiobook 16 OLED feels underpowered for a notebook of this grade. In our tests, the laptop’s battery lasted for up to 9 hours when the laptop was in Airplane mode, and with all of the networking peripherals turned on, it lasted for just under 5 hours  The enormous 240W charger needs over 3 hours to fully recharge the battery in this setup because there is no fast charging capability.