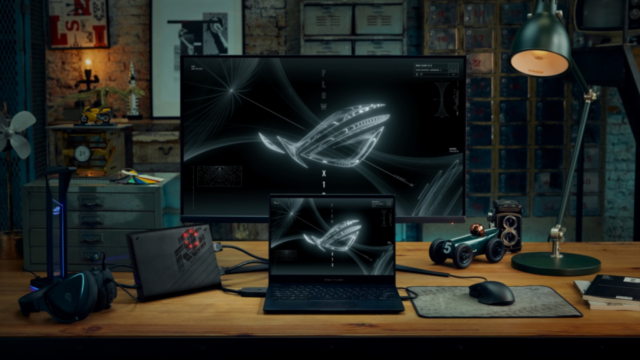 ASUS India, Republic of Gamers (ROG) today strengthened its Zephyrus and Flow lineup with the launch of the ROG Zephyrus Duo 16, Zephyrus G14, and Flow X16 alongside the refreshed editions of Zephyrus G15, and Flow X13, packed with power and upgraded performance. The laptops feature AMD Ryzen 6000 series mobile processors and a MUX Switch to deliver uncompromising powerful gaming performance. The laptops are an addition to ASUS’ extensive gaming portfolio and are designed to uplift the competitive edge of the gamers with state-of-the-art technology. Resonating the philosophy of ‘Compact is the new Impact’, the latest gaming lineup offers versatility to the gamers by bolstering the gaming experience. The product pricing for Zephyrus Duo 16 starts from INR 249,990, Zephyrus G14 – INR 146,990, and Zephyrus G15 – INR 157,990 and will go on sale online and offline. While the pricing for ROG Flow X16 starts from INR 171,990 and Flow X13 – INR 121,990 onwards and will be available online and offline.

In conjunction with the launch, ASUS ROG also introduced the #BeYouWithROG campaign, which encourages users to explore their creative side by staying true to their authentic self. The brand’s objective with this campaign is to inspire consumers to believe in themselves, be brave, and fearless, and follow their passion, no matter what!

Commenting on the new range of gaming computers, Arnold Su, Business Head, Consumer and Gaming PC, System Business Group, ASUS India, stated, “At ASUS, we take pride in being able to deliver to our customers a holistic gaming experience, We are confident that the new Zephyrus and Flow lineups will deliver a whole new level of immersion to both seasoned and aspiring gamers. The ultra-sleek chassis that the machines are equipped with is designed to impart an equally unique style wherever carried. Be it your home, workstation or a gaming battle station.”

“AMD is thrilled to partner with ASUS India to launch the new ROG Flow and Zephyrus series of high-performance gaming laptops powered by the AMD Ryzen™ 6000 Series Mobile processors,” says Vinay Sinha, Managing Director – Sales, AMD India. “Gaming continues to be a huge focus for us and AMD remains committed to delivering the ultimate gaming experiences to gamers, enthusiasts and professionals. Built on the 6nm manufacturing node, these laptops powered by the Ryzen™ 6000 Series processors and integrated AMD Radeon™ Graphics, will provide stunning visuals, superior performance, and higher framerates.”

ASUS ROG introduced the powerful Flow X16, which is a 16-inch ultra slim device with XG Mobile compatibility that fits in an ultra-compact 15-inch chassis and speeds through most demanding tasks, thanks to cutting-edge processors, with up to an AMD Ryzen™ 9 6900HS. Its ultra slim frame is equipped with up to an NVIDIA® GeForce RTX™ 3070Ti Laptop GPU to let you game with complete confidence. Built on NVIDIA’s Ampere architecture, the latest GPU options combine new streaming multiprocessors with enhanced RT and Tensor cores to provide unparalleled realism with Ray-Traced graphics. Move freely, create, stream, and game wherever. To achieve great cooling in such thin and slim form factor, we have, for the first time ever, included a revolutionary tri fan setup called the Frost Force cooling system. It is combined with our Pulsar Heatsink, which redirects the airflow towards the GPU. This results in exceptional cooling and superior performance. Our Nebula HDR Display™ is powered by AmLED technology from AUO and ROG’s own in-house backlight algorithm. This adaptive control technology utilizes image processing as well as dynamic dimming and boosting to create hyper-accurate local dimming with 512 local dimming zones. This helps reduce the blooming effect that’s observed on some HDR panels. With the increased density of Mini LED, your content will look more vibrant than ever.

Another powerful addition to the Flow family is the new Flow X13. It comes with Windows 11 Home, which has never been as flexible, powerful, or portable. This Ultra slim 13” 1.3kg chassis, speed through gaming and go beyond with up to the latest Ryzen™ 9 6900HS CPU and GeForce RTX™ 3050 Ti GPU. Optional XG Mobile eGPU boosts graphics on demand with up to an AMD Radeon RX 6850M XT. With a choice of 4K UHD or 120Hz FHD display option, go wherever your creative flow takes you. The X13 has a 360-degree hinge and a multitude of different viewing configurations. The display is touch-enabled as well and outfitted with scratch-resistant Corning Gorilla Glass for added durability. Set it to the clamshell mode for everyday work and play, or switch to stand mode to easily share your screen in small spaces. Our solution, the XG Mobile eGPU uses an exclusive PCIe Gen 3 X8 lane interface that delivers 7.88GB/s of dedicated bandwidth to the GPU, and a dedicated USB link for driving the I/O hub. Fast. Fluid. Flexible. The second iteration of our first 13” gaming device embodies versatility. A low-profile design helps it slip easily into crowded bags, leaving more room for your favorite gaming gear. The side-mounted power button has an integrated fingerprint sensor, allowing you to login 3x faster and more securely than a password.

The Zephyrus line up is ramped up with The Zephyrus Duo 16 which enables you to experience true multitasking with a seamless dual display design. The second 14.1” touchscreen display supports resolutions of up to 4K and is equipped with up to an AMD Ryzen 9 6900HX CPU and up to NVIDIA RTX 3080Ti series GPUs with MUX Switch and blazing fast speeds and low boot times with 2 TB PCIe Gen 4 X4 SSDsand 32GB of Dual Channel DDR5 4800MHz RAM. To cool all the high-end hardware, there’s ROG Intelligent Cooling system with 84-blade Arc Flow fans and Conductonaut Extreme liquid metal compound on the CPU for up to 15° lower temperatures compared to the traditional thermal paste. The large 90Whr battery and support for USB Type-C 100W Power Delivery Fast Charging, work confidently on the go. The secondary ScreenPad Plus display is offered in 3840 x 1100 (4K) and 1920 x 550 resolutions. Both panel options offer 100% sRGB, 400 nits brightness with Touch and Stylus input. The ROG Nebula Display panel supports Dolby Vision HDR, Adaptive Sync, 500 nits max brightness and is Pantone validated with 100% DCI-P3 coverage. An IR camera with Windows Hello support enables logging into Windows quickly and taking on any typing tasks with a comfortable 1.7mm travel distance keyboard. Furthermore, a Type-C port on the right edge of the Duo 16 will be USB4 capable with a software update that’s expected to enable the capability later this year.

The Zephyrus G14, compared to the last year’s model has significant improvements in its overall design and performance. Not only has the platform been upgraded to the new AMD Ryzen™ 6000 Series processors for mobile, but both the up to AMD Radeon RX 6800S and Up to the latest Ryzen 9 6900HS Processor with Radeon™ Graphics offer a considerable uptick in performance compared to last year’s RTX 3060- equipped ASUS G14. Featuring a 14” slim and light chassis, the G14 has been redesigned to cover all of the users’ daily needs, from gaming to content creation, while on the move. The Zephyrus G14 now features a 16:10 aspect ratio to accommodate more content on users’ screens. It’s super slim 4.7mm side bezels and a 91% screen-to-body ratio provide users with a truly immersive gaming and visual experience. The cooling is better than ever, in part thanks to the newly added Vapor Chamber and the use of liquid metal on both the processor and the GPU. The improved thermal design allows the new G14 to get additional thermal headroom and achieve up to 105W of total graphics power (with AMD SmartShift Max technology). Similarly, the added MUX switch provides additional gaming performance ranging from 5% to 10% on average or even above 40% in selected eSports titles. The panel has gone through a major update as well and now fulfills all the requirements to be labeled as ROG Nebula Display. Now featuring a 16:10 aspect ratio, the panel is not only brighter with up to 500nits, but also features response times as low as 3ms, thereby making it an ideal option for gaming. It is equipped with Dolby Vision, 100% DCI-P3 color coverage with Pantone Validation for color accuracy. The Zephyrus G14 is a portable powerhouse, designed to cover all of users’ daily needs, from gaming to content creation.

The Zephyrus G15, is equipped with up to an AMD Ryzen 9 6900HS laptop processor. With 8 cores and 16 threads, the beating heart of the G15 is built on cutting-edge 6nm technology and is paired with the top-of-the-line up to an NVIDIA® GeForce RTX™ 3080 graphics card. In addition, the new model is configurable with up to 16 GB of DDR5 RAM– 4800 MHz (expandable to 48GB), which provides the bandwidth and speed for all the multitasking you throw at it. For the ultimate visual experience, the Zephyrus G15 is configurable with either a 240Hz or 165 Hz QHD panel, combining the benefits of high-resolution displays with responsive and fast refresh rates. With Adaptive-Sync technology 100% DCI- P3 color gamut coverage, game, stream, and create to your heart’s content with rich, detailed visuals. The asymmetrical dot matrix design on the lid is made with a precision CNC milling process that creates 8279 perfectly spaced perforations across an incredibly compact surface area. For style points, we added a prismatic film that gleams up from beneath, adding a subtle but striking shimmering effect when the light hits it at just the right angle.