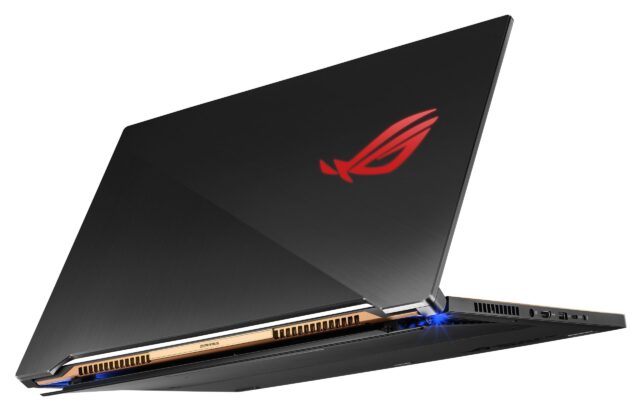 The most affordable among the laptops is the Vivobook Gaming F571 that is priced at Rs. 66,990 while the Zephyrus S15 makes up the upper end of the price spectrum with a price tag of Rs. 2,34,990. Asus said the new range comes with cutting edge hardware that allows for superior gameplay while encased in a laptop chassis that is light and portable.

Apart from outright performance, the other highlight of the new ROG series is its intelligent cooling mechanism based on liquid metal from Thermal Grizzly. Asus is claiming the new cooling tech is effective in bringing temperatures down by 12 degrees. Also, the slow-down reached with a rise in temperature is around 35 percent, all of which ensures the CPU is able to reach and maintain optimum performance over a longer duration. The entire cooling mechanism is also 4 percent quieter as well.

Mention must also be made of the keyboard, which Asus said has been specially designed to allow for extended and intensive gaming operations. Towards that, the keyboard comes with perceivable gaps between the function keys while the arrow keys, too, are isolated for easy identification during crunch moments. The space bar again has been extended for ease in operation. The keystrokes also elicit faster responses.

The new ROG Zephyrus S15, with its ultra-slim profile, belies its performance capabilities thanks to the latest Gen Intel Core i7 10875H processor and GeForce RTX 2080-SUPER Max-Q GPU with ROG Boost that it comes with. Also, aiding in peak performance over a longer duration is the new AAS cooling technology that the laptop features. The Thunderbolt 3 provides for unmatched levels of connectivity.

Asus is claiming the new ROG Zephyrus S17 is the most compact gaming laptop ever in the 17-inch category. Power comes from the stellar combination of 10th Gen Intel Core i7 and GeForce RTX 2080 SUPER Max-Q GPU that provides for a top quality gaming experience that you’d usually expect out of a desktop PC. Aiding in the high-end gaming performance is real-time ray tracing technology and AI-enhanced image processing feature. Asus said it is accelerated by ROG Boost up to 1330MHz at 90W in turbo mode, with 8 GB of GDDR6 VRAM clocked at 5501MHz.

The laptop comes with a 4K display having a wide colour gamut of 100 percent of Adobe RGB colour space. The laptop also offers the perfect match between high-end performance and portability, which, coupled with the laptop’s excellent sound quality, makes it ideal for both content creators as well as gamers. The laptop is available in exciting shades of prism grey and prism black.

The first thing that catches the eye with the new Vivobook Gaming F571 is its Polygon edges that impart a definite character to the laptop. The laptop otherwise comes with a 120 Hz display for a smooth viewing experience san any motion blur. The Full HD resolution along with the wide viewing angles making it not only great for gaming but is ideal for entertainment as well.

Another highlight of the laptop is its superior cooling technology that ensures the processor is able to sustain peak performance over a longer period of time.

The new laptop duo of TUF F15 and F17 is easily one of the best gaming laptops in its class, thanks to the incredible power they have on tap. That makes it ideal for both entertainments as well as content creation as well. Other salient features of the laptop include massive storage along with a unique self-cleaning fan complemented by anti-dust tunnels located at the edge of the fans. Those acts to catch incoming dust particles and force them back out of the laptop chassis.

Of all the new ROG laptops and desktops announced by Asus, on the Vivobook Gaming F571 and TUF F15 will be available exclusively from Flipkart and Amazon, respectively. The rest of the devices can be bought from Flipkart, Amazon, Reliance, Croma, and Vijay sales along with the Asus retail channels.