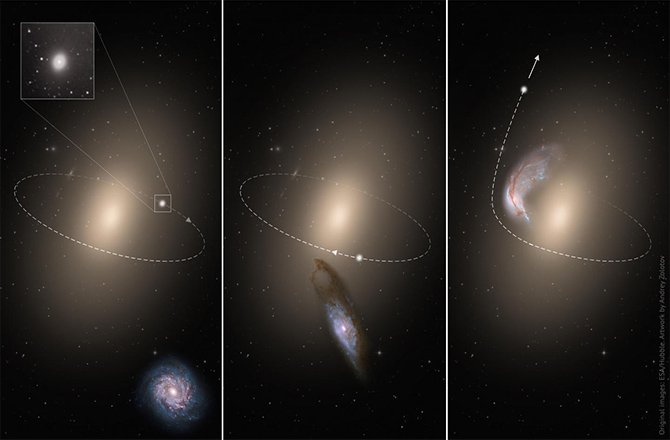 Moscow State University – Astronomers at the Harvard-Smithsonian Center for Astrophysics and Moscow State University, has spotted 11 small homeless galaxies. These galaxies have run away from their home place or their birthplaces and are now wandering in the intergalactic space. Any object in the space that moves faster as compared to the escape velocity is a runaway, as it will never come back to its birthplace after departure.

The speed of such a runaway object or star is more than 500 kms/second. On the contrary, a galaxy categorized as runaway runs even faster, travelling at a speed of 3000 kms/second. According to astronomer, Igor Chilingarian, since these galaxies and stars have come away far from their place, they face a lonely and exiled future. They are now being separated from the clusters of a galaxy with which they lived earlier.

Before this study, humankind knew only about 30 elliptical, compact galaxies residing in the clusters of galaxy. However, after this study, we now know the existence of 11 completely isolated, small galaxies. Although tiny galaxies are hard to detect, the researchers could uncover them by following the path of previously undiscovered 200 compact elliptical.

These newly found small galaxies are moving at a very fast speed.

According to Chilingarian, a three-body interaction can be one of the reasons behind the separation of these galaxies from their parent clusters. The discovery is considered one of the prominent successes of the project – Virtual Observatory. The project is being carried out to compile data from the various astronomical surveys. This data mining has proved to be of great importance for the astronomers over the years.