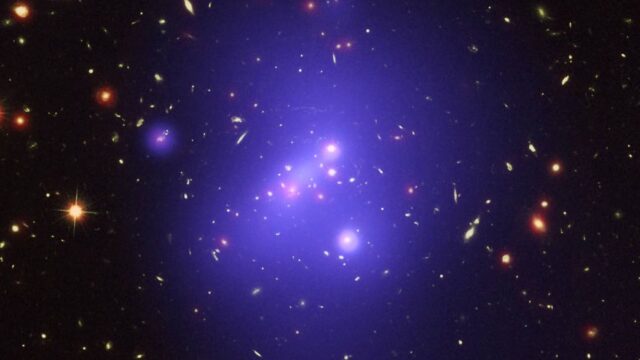 Astronomers have discovered a big and churning galaxy cluster that came into existence some 3.88 billion years after the Big Bang. It is almost 1,000 times larger than our Milky Way galaxy. The galaxy cluster has been named IDCS J1426.5+3508 (or IDCS 1426) and is situated 10 billion light years away from Earth. The cluster is made up of thousands of galaxies and weighs 250 trillion times more massive than our Sun or 1,000 times more massive than Milky Way galaxy.

The study has been led by Professor Mark Brodwin from the University of Missouri and NASA hopes to unravel the mysteries of mega structures like IDCS 1426, which was formed and evolved very early in the universe.

Galaxy Clusters can be described as a collection of hundreds to thousands of galaxies bound together by gravity. They are massive structures and can be spotted easily nearby, for example, the Virgo cluster that is ravishing and easy to locate.

According to the research team, IDCS 1426 seems to undergo a lot of upheavals. Researchers observed a bright knot of X-rays slightly off center in the cluster. It hints of a shifting of the core from the center some hundred thousand light years away.

The core could have been shifted by a catastrophic collision with another massive galaxy cluster leading to the gasses within the cluster to be squeezed out.

Michael McDonald, assistant professor of physics at MIT said that galaxies are presumed to have been formed when the Universe has been cool, but this cluster popped up. So it is possible that another huge cluster came around and collided. It could explain the gigantic size of the IDCS 1426.

The IDCS 1426 was first detected in 2012 by scientists using the Nasa’s Spitzer Space Telescope.