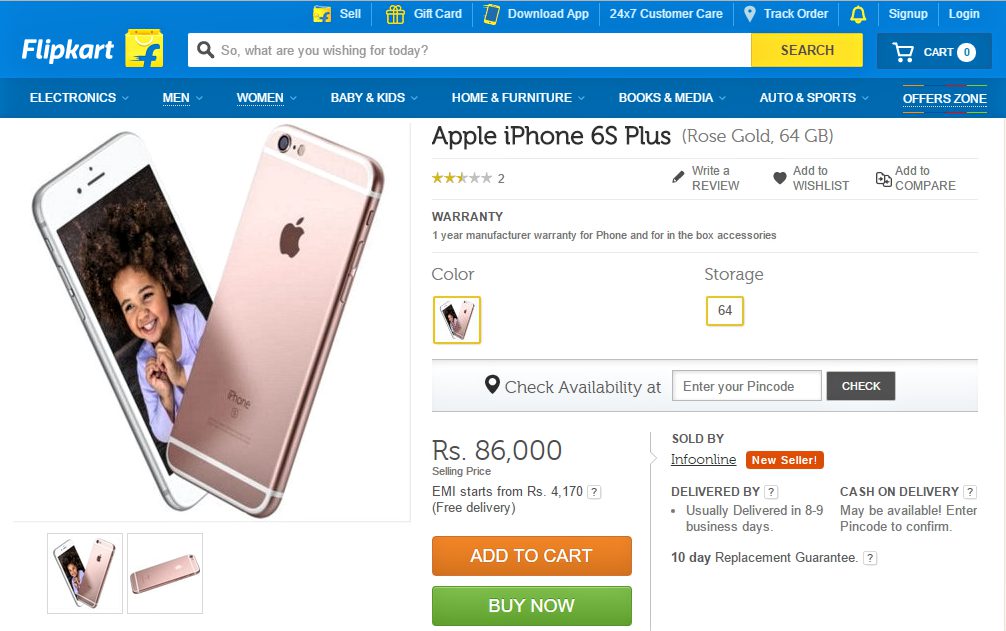 The Apple iPhone 6S Plus is now available to buy on Flipkart for Rs. 86,000. The listing says it’s the Rose Gold 64GB variant of Apple’s this year flagship, launching in India on October 16. Whereas the offline retail stores are taking pre-orders, Flipkart is all set to deliver them by October 13 which is 3 days before the official release date.

The single Nano-SIM Apple iPhone 6S Plus features a 5.5-inch Retina HD display with 3D Touch and screen resolution of 1920 x 1080 pixels at 401 ppi. The display is further protected by fingerprint-resistance oleophobic coating on the front.

Powered by 1.84 GHz 64-bit Single Core A9 chip embedded with M9 motion coprocessor and paired with 2 GB of RAM, the Apple iPhone 6S Plus is available in three storage variants i.e. 32GB, 64GB and 128GB.

In the camera front, the iPhone 6S Plus sports a 12MP iSight rear camera with Autofocus, optical image stabilization (OIS) and True Tone flash. On the front, there is 5MP iSight camera with Retina flash. The rear camera is capable of 4K video recording (3840 by 2160) at 30 fps.

The smartphone runs on latest iOS v9.0 operating system, which gets enhancements to built-in apps, a smarter digital voice assistant Siri and search and many more.

The Apple iPhone 6S Plus comes packed with built-in 2,750 mAh rechargeable lithium-ion battery, which company touts to deliver full day Talktime on 3G and up to 16 days standby time.

Apple iPhone 6S: The Only Thing That’s Changed Is Everything

The listing says Apple iPhone 6S Plus Rose Gold 64GB Variant comes with full Manufacturer’s warranty and service cover, which means it’s an Indian variant and not the international. Let us know if you are going to buy the new bling or will be waiting for some users feedback!