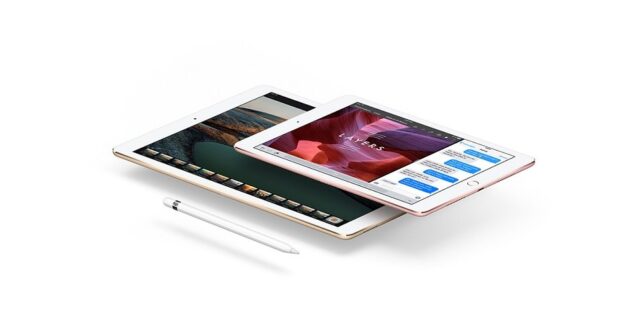 The Apple iPad Pro now comes in two variants — one that has a smaller screen at 9.7-inch and the other with a screen at 12.9-inch. Apple introduced a smaller version of the iPad Pro back in March, featuring a slew of new upgrades and features. We compare the new tablet with its predecessor which launched late last year.

The new iPad model is both smaller and lighter than the one released last year. It features a 9.7” screen and weighs 444 grams for the ‘Cellular’ compatible model. The Wi-Fi only model is lighter and weighs 437 grams. The new iPad Pro measures 240mm in length, 169.5 mm in breadth and 6.1 mm in thickness. If compared with the larger iPad Pro, the new one is about 279 grams lighter, if you compare the Cellular models of both makes.

As far as specs are concerned, the device comes with  2GB of RAM, which is less than the larger iPad Pro but runs the same A9 chip. At the back of the iPad Pro 9.7”, you’ll find an improved 12MP camera with auto-focus and an added dual-tone flash.

The older version doesn’t have a flash for the rear camera at all. Another improvement is that you can now also shoot 4K resolution videos with your rear camera, an upgrade from the previous HD recording capability. The front camera is now 5MP and also allows you to take a panoramic image with it. The employment of 4 stereo speakers helps recreate better playback sound.

The 9.7-inch variant is available for purchase in three storage options — 32GB, 128GB, along with a 256GB variant. Apple has never offered an iPad with such large storage capabilities in the past. The 32GB variant would roughly cots around $599, the 128 GB model costs around $749, and the 256GB variant would set you back by $899 for the Wi-Fi-only model.

The iPad Pro 12.9” comes with a powerful 4GB RAM and runs on Apple’s latest A9 chip. It has an 8MP rear camera with auto-focus along with a 1.2MP front camera. Unlike the newer iPad Pro, the 12.9” model does not have a flash to go along with the camera at the rear of the device.

Both devices have the same CPU and GPU, come with a fingerprint sensor, an accelerometer, gyroscope along with support for 4G networks. You can buy both the iPad Pro 9.7” and 12.9” in Space Grey, Silver, and Gold color options. The 9.7” model is also available in Rose Gold.