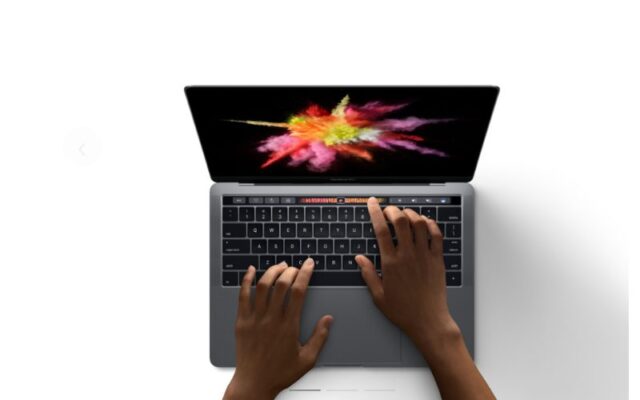 Apple has finally announced the newest 13-inch and 15-inch MacBook Pro laptops at its Hello event in Silver and Space Grey colour options. According to the company, these new MacBook Pro models are the thinnest MacBooks ever.

The newly unveiled MacBook Pro range get a slew of major upgrades and changes such as a new force touch trackpad, that’s apparently twice as big as the previous gen model. However, one of the major changes is the lack of the traditional ‘fn’ or function key. Apple has made the fn key redundant with its latest MacBook Pro models. Instead, they feature a new TouchBar Screen for navigation, which is even capable of authorising payment via Touch ID.

Besides, the newly unveiled MacBook Pro models gets four USB Type-C ports, where any of the four can also be used for charging or for  other purposes. Apple also claims that the new 13-inch MacBook Pro is 13 percent slimmer and smaller than the MacBook Air. The company also announced that it’ll continue to offer the 13-inch MacBook Air, but in Space Grey featuring two Thunderbolt Ports.

In total, the company has announced three new MacBook Pro models – a 13-inch version with standard function keys, a 13-inch with Touch Bar, along with 15-inch model also featuring a Touch Bar.

In terms of specs, the entry level 13-inch MacBook Pro gets dual-core Intel i5 processor bundled with 8G of RAM and 256GB SSD storage. It features Intel Iris Graphics 540, along two Thunderbolt 3 ports.

Up next we have the 13-inch MacBook Pro with TouchBar and Touch ID, which gets a dual-core Intel Core i5 processor bundled with Intel Iris Graphics 550, 8GB of RAM and 256GB SSD storage. This one gets four thunderbolt 3 ports.

Finally, the 15-inch MacBook Pro with Touch Bar and Touch ID packs a quad-core Intel Core i7 processor bundled with Radeon Pro 450 graphics, a whopping 16GB of RAM along with 256GB SSD storage. Even this one features four Thunderbolt 3 ports.

The 13″ model with the standard function keys will ship today, while the 13-inch and 15-inch models with Touch Bar will start shipping 2-3 weeks.