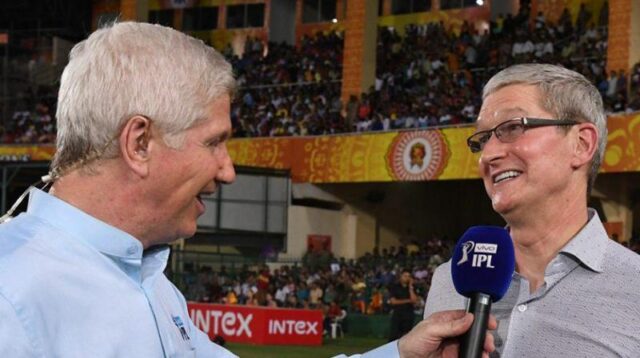 In his first ever visit to India, Apple CEO Tim Cook took out time to do what India is best in, Cricket and Bollywood. Tim Cook was photographed watching IPL in Kanpur on Thursday with IPL Chairman Rajiv Shukla and Bollywood actor Sanjay Dutt.

Cook managed to take time out of business and pleasure. But what intrigues each and everyone is Tim Cook looking at getting his hands at Cricket and Bollywood for the expansion of Apple. As of now, no official statement has been issued by the Apple team if Tim Cook is looking at some new opportunity in Bollywood and Cricket.

Tim Cook’s visit to the country was to announce the development of an app design center in Bengaluru and first development center in Hyderabad to work on Google Maps. He also had a meeting with Prime Minister Narendra Modi to discuss manufacturing and retailing of Apple devices in the country.

Along with this, he also attended a dinner party hosted by Shahrukh Khan in his home Mannat, where Tim Cook interacted with some of the biggest celebrities of Bollywood like Amitabh Bachchan, Aamir Khan, etc. Other than this he took a tour of Mehboob Studio in Bandra where Mahesh Bhatt was shooting for his upcoming movie.

In his last four-day visit, Tim Cook looks like how to mix business with pleasure.