Just when Samsung Galaxy Note 7 fiasco involving explosion and burns almost came to a rest, Samsung Galaxy S7 Edge exploded right in front of a woman’s eyes. Recently, Ashleigh Deakin had a chance to witness the explosion of Galaxy S7 Edge. According to industry analysts, Samsung hasn’t solved the battery problem on their smartphones. annd the situation is not in their control.

Deakin took to Facebook and disclosed that her Galaxy S7 Edge handset exploded before her. This has prompted her to switch to iPhone. Deakin was reportedly working on her desk when the smartphone exploded. The device was neither in use not on charge. She also posted several photographs, which showcases the exploded smartphone. 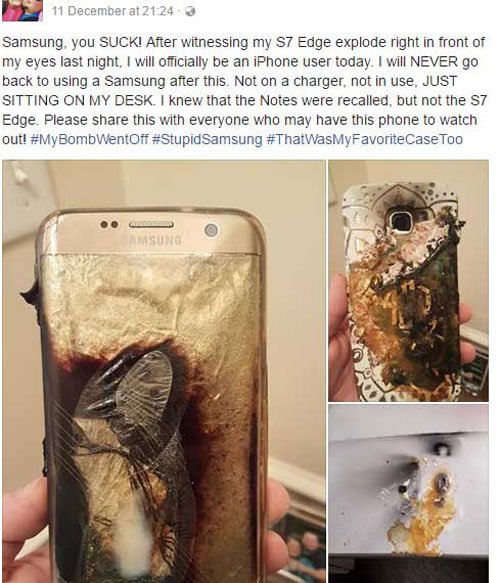 Upon inspection, we found that the display is in unusable condition and completely charred. Moreover, the rear side also looks completely damaged. It looks like the customer has used a protective cover on the rear as we can infer from the captures.

Deakin, meanwhile, revealed that she will never purchase a Samsung smartphone going forward. She added that the phone was just sitting on the desk when it exploded. It seems that she was not charging or working with the Galaxy S7 Edge when it exploded.

She concludes by asking her followers to share the post on their wall. As per experts, the explosion could be due to some other factors and not because of faulty battery and overcharging adapters.

Recently, a Samsung Galaxy S7 exploded in a car just after few days after the company recalled the smartphone. Samsung is facing tough times after the explosion and subsequent recall of Galaxy Note 7. Interestingly, Samsung washing machines also caused heavy turbulence and fire in the US.

In the meantime, Samsung will issue an update on December 19, which restricts the charging capacity of the smartphone to 30%. This is because consumers in the US still not returned their handsets and this update will make their handsets pretty unusable. There are reports that Samsung is planning to deactivate Note 7 handsets in circulation using IMEI number.