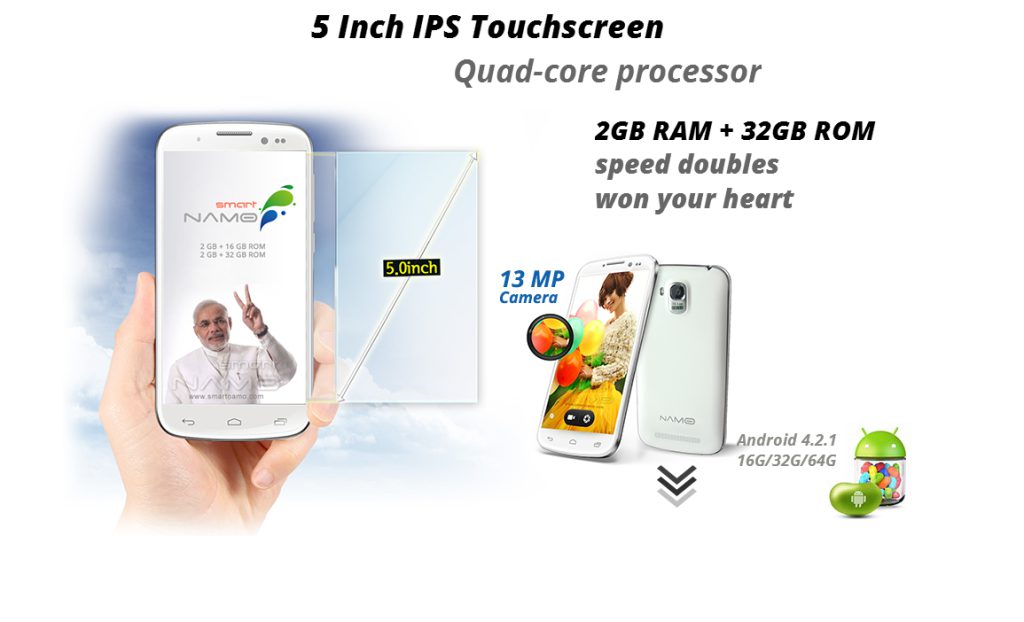 Driven by the fan-following that the BJP Prime Ministerial candidate, Narendra Modi, has been generating especially amongst the youth in India, a smartphone has been announced after his name, called the Smart NAMO.

The manufacturers have explained that NAMO stands for Narendar Modi and Next Generation Android Mobile Odyssey, and it’s their way of expressing dedication and respect to Shri Narendra Modi. To exactly quote their words, being “fans of Shri Narendra Modi, our forthcoming future leader of our great nation India, we are manufacturing latest android handset dedicated to the “IRONMAN” of modern India”.

The official website of the phone www.smartnamo.com revealed that the Smart NAMO will run on Android 4.2, and will be available in 16GB, 32GB, and 64GB versions. It will be powered by the ultra powerful Quad Core 1.5GHz CPU, and 6589-T Quad Core processor with 2GB RAM. Besides, the new Smart Namo will flaunt a 5-inch IPS Touchscreen with an impressive 13-megapixel camera.

As per the company announcement, they will launch two smartphones, viz. Smart NAMO Saffron 1, and Smart NAMO Saffron 2. While the Saffron 2 would cost Rs. 24,000, the Saffron 1 will be available in two versions for Rs. 23,000 and Rs. 18,000. However, there are reports that the Smart NAMO phones will be priced at Rs. 16,000 at the time of launch, and will feature an array of videos as well as apps related to Shri Narendra Modi.

Besides these smartphones, the company is also planning to introduce feature phones with the price range starting from Rs. 1000.

So if you are a big Modi fan, just like thousands of Indians are, then you can plan to buy this new Smart NAMO to express your loyalty.