Amkette is designing accessories for smartphone and redefining the digital lifestyle since 1984. Its new product is going to be the center of attraction among the hardcore smartphone gamers – Evo Gamepad Pro 2. This Bluetooth gamepad for smartphones is much cheaper than the rivals like MAD Catz or Steel Series at Rs. 2,599.

This gamepad is much similar to its predecessor in design, the size of the controller has increased and the smartphone holder size also increased to hold bigger smartphones with 6 inches display.

While playing games on smartphones we got the on-screen controls, which are not much comfortable especially while playing first person shooters. It’s hard to control the game from that virtual buttons, sometimes the on-screen controls misfires or don’t fire at all. But no more, Amkette Evo Gamepad Pro 2 going to change it all. Let us see how this Bluetooth gamepad done with the most popular smartphone games. 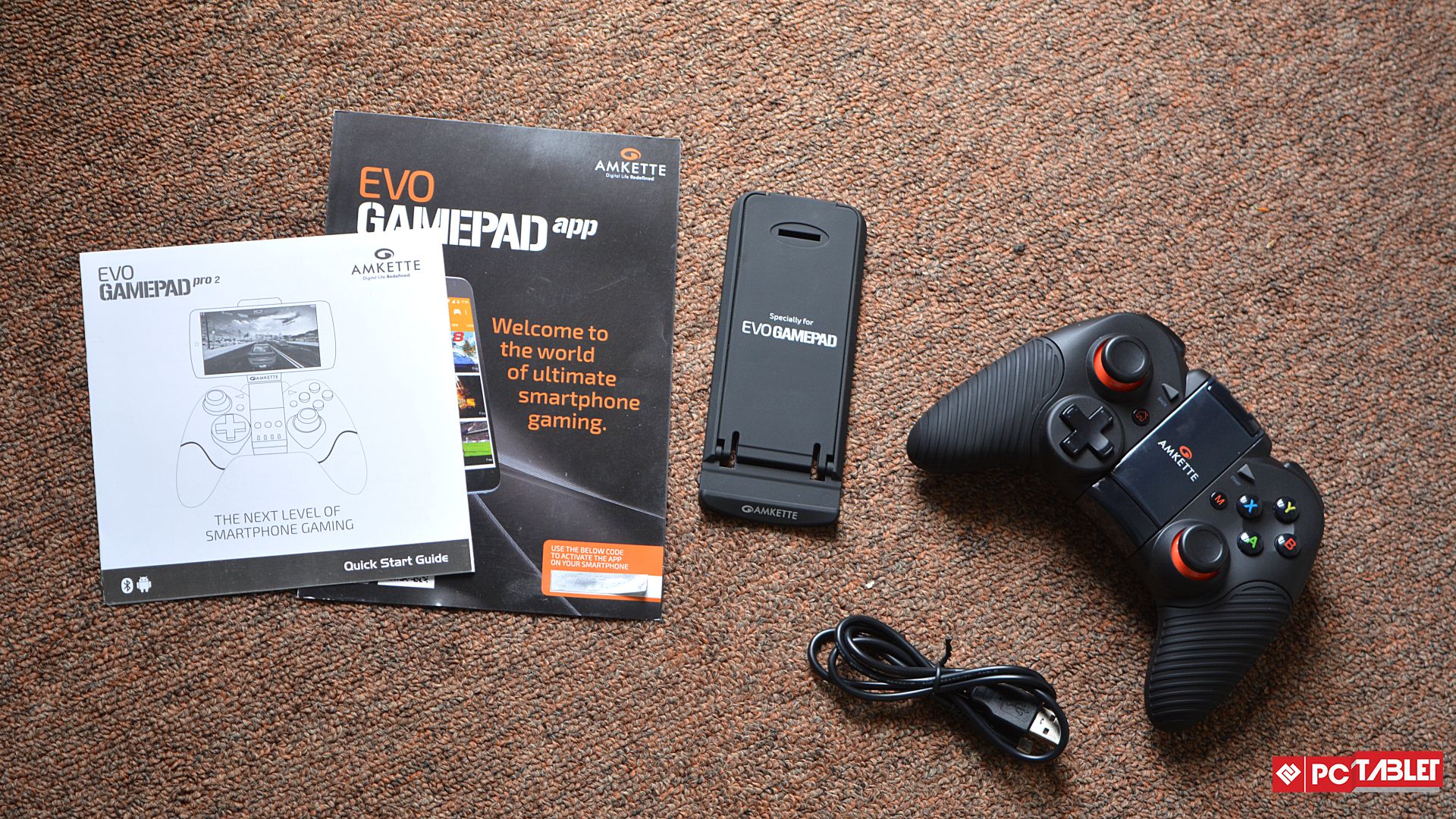 I haven’t expected much from Amkette to add in the box with this much low price but still we got one smartphone stand, a USB cable to charge the device and the operation manual. The smartphone stand comes in handy when you don’t want to hook up your smartphone to the gamepad, keep it on the stand and play wirelessly.

The gamepad looks sturdy with the matte finish all over the body; the hand grip is rubber which makes it less slippery and comfortable so you can game for hours. The gamepad size is best for all hand type; it fits perfectly in hands, and all the keys and analog sticks are easy to reach.

[ps_prices] Amkette Evo Gamepad Pro 2 weighs somewhat near the XBox controller. Amkette Evo Gamepad Pro comes with the XBox key configurations; on the left side an analog stick and a D-Pad below it. At the right side, four combat keys and one analog stick below them. It also features four keys; back, start, home and mode. These four keys functions in both mode; gamepad mode or mouse mode. Beneath the holder, there are three multimedia keys and four LED indicators to indicate the mode and battery status.

The phone holder had spring action to hold the device and rubber padding to keep the device steady. It can hold devices up to six inches screen size. You can also fold down the device holder while playing on tablets; just kick stand the tablet, pair, and play. With media keys, you can adjust volume and play or pause the music.

Amkette Evo Gamepad Pro 2 works both ways; gamepad and mouse. You don’t need to put the gamepad down or hold the device in a weird way to launch or change the game. Just switch the mode to mouse (the best feature) with the mode key (Key with “M” printed) and control the device with a mouse pointer. In mouse mode, you need to move the mouse pointer with the right analog stick and click with the L1 key. Back key works as back key and the Home key will take you to the home screen.

Amkette Gamepad app is available for Android devices with Android 4.0 and up. This app has nothing to do with the pairing, it just lists compatible games and installed games so you can launch them from this app only. Clicking on one of the compatible games will take you to the Google Play Store page for that game so that you can download it quickly.  It also shows you how to pair the gamepad with your Android device with a diagram. It also contains the help links and the official

To pair the device with your Android smartphone, press and hold down the Home key till the two LEDs start blinking rapidly which means the device is in pair mode. On your phone, open Bluetooth settings and tap on Amkette Evo Gamepad Pro 2 to pair. The blinking LED will settle down, and you will now see the gamepad LED is glowing steadily. Now launch any game and it will run smoothly.

We tested the best high graphics games with the gamepad; we played some first-person shooters like Dead Trigger 2 and racing games like Real Racing 3. Gamepad worked perfectly with both type of games, you can control main menu and settings as well with no need to touch the display.

To switch to the mouse mode, press the Mode key (the button with “M”) and the mouse key will glow. Use left analog stick to move the pointer and L1 button to click. You can still use those back key to go back inside any app and home key to go home screen directly.

While using the device for some time, there were no issues neither with the button nor its pairing with the smartphone. The battery backup is amazing; it gives you approx 8 to 10 hours gaming with a full charge.

The best feature of the gamepad is the mouse mode which I tried with my Windows phone also, and it worked seamlessly. The only problem is the device which you are inserting into the holder, the volume rocker or power button on the edge get pressed automatically and creates problem while playing.