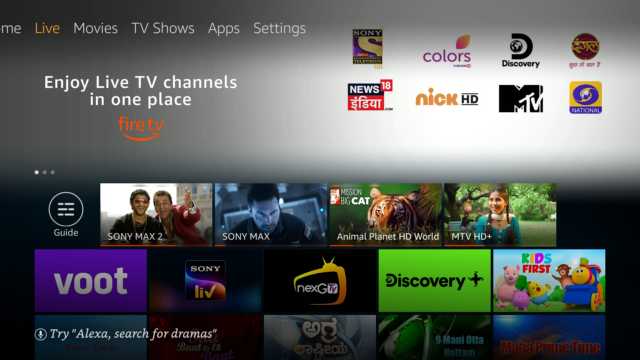 With the update, users will now get to see a ‘Live’ tab on the navigation pane while there is going to be an ‘On Now’ row on the Fire TV home screen as well. All of this should lead to the faster and easier discovery of live channels from the various streaming apps that the user is subscribed to.

As Amazon stated, there is going to be SonyLIV, Voot, Discovery+, and NextG TV who are the first lot of content providers to join the Live Tv bandwagon. Zee 5 too has evinced interest to be part of Live TV and is expected to be Live soon.

Among the channels that would be available to the users via Live TV include SAB HD, Colors HD, SET HD, Nick HD+, Dangal, DD National, News18 India, MTV Beats HD, SONY BBC Earth HD, Mastii TV Music, and Discovery. Once Zee joins the party, their channels such as Zee TV, Zee Cinema, and Zee News too would be available on Live TV.

Accessing the live channels has also been made simple with the help of Alexa digital assistant. All that the users have to do is say like, ‘Alexa, Watch Colors HD’ to launch the Color HD channel. It’s as simple as that. The ‘On Now’ row on the home screen will show the channels currently available. Each channel thumbnail will also have a red progress bar to show how much the show has progressed in real-time.

The introduction of the Live TV feature will also allow for ease in accessing the Fire TV channel guide that is now present under the ‘Options’ row of the Live tab. Fire TV Lite users will find the Options tab via the Guide button present on their Alexa Voice Remote Lite.