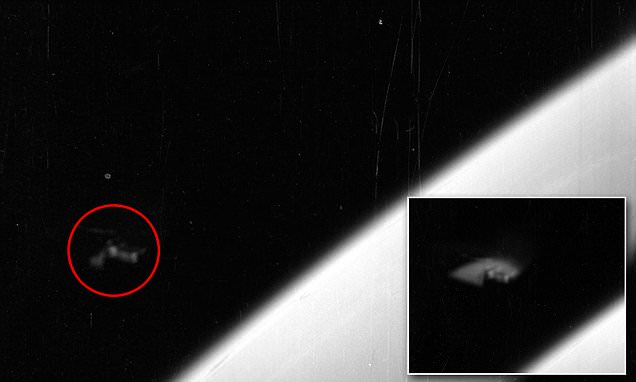 NASA – Blogger, Scott C Waring, has claimed that the 55-year-old snap of NASA reveals a UFO spaceship observing the Mercury probe sent during the space exploration’s formative days. Waring, who is known as an eagle-eyed hunter of aliens, saw the image when he was watching the snap. According to him, this proves that the aliens are watching the humankind keenly.

Waring found the presence of a disc in the photos from the Mercury project that took place in December 1960. He says that it is not surprising that aliens have shown interest in watching the historic moment related to human history as the capsule did not carry any human. Hence, there were no worries that the aliens could have been seen. The photograph shows the earth in the background while the UFO is observing the activity of the Mercury capsule.

The Mercury-Redstone 1A on December 19, 1960 was observing the activities of Mercury when an NASA staffer snapped the photographs. Only one or two photographs out of the several photos reveal the presence of a classic disk having a wedge cut out. Project Mercury was the first ambitious US mission in which six manned space flights were also included. As a part of the mission in February 1962, a manned space flight was sent making John Glenn the first American to orbit our planet.

UFOs are the unidentified flying objects that are not identifiable as a known phenomenon or an object. People believe that the UFOs are the objects sent by the aliens or extraterrestrial life on earth for observing the activities on our planet. The identification of these alien objects is always difficult as they are visible only for a short time and the quality of evidence is quite low.

The United States Air Force (USAF) created the term in 1953 to ensure that all such reports are categorized under one head. Over the years, many people have claimed to cite the UFO objects, but even now, they remain a mystery.