Google has announced two new Chromebooks in the form of the Acer Chromebook Spin 11 and Asus Chromebook Flip C213. These newly announced Chromebooks are specially created for the US education market, where Chromebooks reportedly account for nearly 50 percent of the total market share.

The device can also be used in tablet mode thanks to 360-degree dual torque hinge. It comes with an 11.6-inch HD IPS touchscreen display. Powering the laptop is either an Intel Celeron N3350 dual-core processor or Intel Celeron N3450 quad-core processor. Users can also choose among 4GB/8GB RAM and 32GB/64GB built-in storage. Connectivity options on the Spin 11 include 2×2 MIMO Wi-Fi, Bluetooth 4.2, 2 USB Type-C ports, 2 USB Type A 3.0 ports along with a microSD slot.

Moreover, it also comes with a stylus that uses Wacom EMR (Electro-Magnetic Resonance) technology. note-taking. Google says it works with low-cost pens, which would help students to draw or take notes. They don’t even need charging or paired with other devices, and also come with an “eraser” feature.

Other key features on the Chromebook Spin 11 are two wide angle HD cams, which include a 1MP located above the display, and a 5MP camera above the keyboard which can be used in tablet mode. 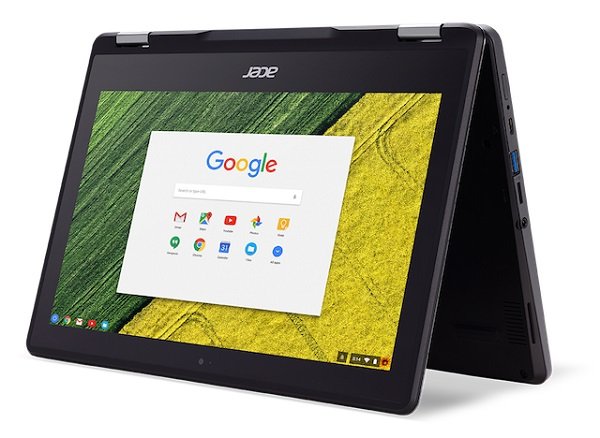 Google also claims that the notebook is shockproof with an (MIL-STD 810G) rating, and can also handle accidental liquid spills. Not to forget, the laptop will support both Android and PlayStore right out of the box when it launches.

Google says the Acer Chromebook Spin 11 goes on sale this spring, though pricing remains a mystery. The company notes these details are to be announced at a later date.

Besides, Google has also announced the Asus Chromebook Flip C213, which also comes with a 360-degree hinge. It features a ruggedized “modular construction” which means its part can be easily replaced, in case children don’t handle it with care.